In the second year of the redesigned SAT (and of our guide), some stability has returned to standardized testing. Counselors we surveyed had fewer doubts than last year, but questions remain. Khan Academy has set up an entirely free prep program for the SAT, which the College Board has promoted aggressively, and Kaplan has set up a competing low-cost program for the ACT. Are these programs worth the time? SAT scores have trended higher as predicted by the College board, and with a 1340 on the old test equivalent to a 1400 on the new test, counselors ask if grade inflation has affected the SAT scores. Higher numbers of students are achieving perfect scores on the ACT, and perhaps in response to the perceived ease of the test the ACT has made the test (especially the Math section) more challenging, now including higher-level concepts not typically covered by most Algebra II classes. Should any students still take the ACT early in junior year? The ACT’s English section has drifted closer to the SAT’s Writing section, with more contextual questions that involve careful reading of the test. Which test is easier for our students?

The Changes in Brief:

The Khan Academy collaboration with the College Board has changed the test prep industry. Low-cost classes with unverifiable or not significant score improvements have suffered the most. While the evidence of the Khan Academy’s efficacy may not match the CB’s claims, the platform is nimble, user friendly, and attractive.

As we pointed out last year, scores on the redesigned SAT are significantly higher than those on the old SAT and cannot be equated to scores on the old 1600-point SAT scale, even though the scale appears to be the familiar 1600-point scale. In addition, you have to adjust comparisons to compare the new SAT to the ACT. A 1400 on the SAT, for instance, is no longer a 32 on the ACT; it’s a 30. At the bottom of this guide, please find an updated concordance chart with new ACT percentiles (updated in 2017).

The ACT Math section now frequently includes questions on topics that have not appeared on the ACT prior to 2016. These new questions include Matrices, Slant Asymptotes, and Data Analysis, Statistics, and Probability topics, areas not covered by many Algebra II classes. However, these higher-level topics are only found on the very hardest 5-7 problems on the test, and, while including these, the ACT has modified the curve to make it more forgiving. On some recent tests even 55/60 is a scaled score of 35. Tell your students to not worry about the hardest math questions and to use that time on the questions they know.

The English section now includes more contextual questions, which rewards students who are careful readers with a well-developed sense of sentence structure and expression. As on the Math section, raw to scaled score conversions reflect the increased difficulty. On recent tests, 71/75 is a scaled score of 35.

Bottom line: Although the ACT has increased the difficulty of the English and Math sections, perhaps in an effort to counter the impression that it is the easy test, this increased difficulty is balanced by the easier curve.

Make sure that each student takes a carefully proctored ACT to compare to her scores from a recent PSAT or carefully proctored SAT. Then use the concordance chart below to see which test is better for the student. If the score comparison indicates that one test or the other is better (by a margin of one ACT point or more), direct your student toward that test. If the scores are comparable, ask the student to consider the following:

Important: Focus on either the ACT or the SAT. Regardless of all that has been said, the tests are different enough that for most students, studying for both is a tremendous waste of time. It also may not lead to higher scores. The SAT prioritizes careful consideration, while the ACT prioritizes speed. Most students who switch back and forth follow the wrong strategies for each test, and this affects potential improvement

PSAT scores now only go up to a maximum score of 760 on each sub score, and a maximum possible score of 1520. Although this may seem confusing, you can still consider Junior PSAT scores a good proxy for SAT scores taken in the spring. But, you might say, what about the extra 40 points on each section on the SAT? Those points reflect the additional knowledge gained in the time between when the PSAT and the SAT are typically first administered and the topics learned later in Algebra 2.

The new SAT has a lot of content that is typically covered in Algebra 2, as well as one or two reading passages from the 1800s or earlier. Students who are strong readers and advanced Math students should plan to take the test twice in junior year and, if necessary, once in senior year. December (SAT) and December/Feb (ACT) are good first test dates. March/June (SAT) and April/June (ACT) are good dates for a second test. May can be a good date for Subject tests, especially those that align with AP exams, and for students who don’t want to take May/June tests, the summer tests (July, August) can work for retakes.

Important: Students who are taking Algebra 2 or Geometry in 11th grade, or are not strong readers, should consider delaying the first SAT or ACT to May/June, and the second to the summer before or fall of senior year (the August or October dates for the SAT; July/September for ACT). These test takers may not need SAT Subject tests, especially if they are not applying to the most selective colleges.

The short answer is yes, you can. Ignore the back and forth between College Board and ACT, and use the concordance tables provided by College Board or the summary table below. That’s the data that colleges will continue to use, as they have to use something, and these tables are the only comparison tool they have.

The floor on the new test has moved up and shifted all scores upwards, but the ceiling (1600) has stayed the same. One effect is that the range of strong scores has shrunk and there will be less separation at the top.

We find that scoring profiles for selective colleges are rising to reflect the higher ACT and SAT scores we see. It may be helpful to share with students that selective colleges are asking for higher scores now. Also, as counselors well know, standardized scores are just one factor in the admissions decision, especially for colleges that conduct a holistic review. The combined concordance on the following page should help parents understand new scores in the context of older ones. Most students can still improve scores on a fall retake, and College Board, Khan Academy, and our website (markseducation.com) provide excellent, free materials to help them do so.

The short answer: We don’t know. The data released by the College Board does show that students who use Khan Academy for 20 or more hours have higher SAT scores than those who do not.

However: The College Board’s data fails to separate the other sources of prep received by students who used Khan Academy. From our experience tutoring the SAT over the past 17 years most students motivated enough to work for 20 or more hours on the SAT use multiple forms of preparation: books from Kaplan, Princeton Review, and Marks Prep, practice tests from College Board, and tutoring. Many students also use Khan Academy with a tutor.

On the 2015 PSAT, College Board first introduced a new and seemingly inflated “Nationally Representative Sample Percentile (NRSP)” that was significantly higher than the “User Percentile,” buried in a separate document. They plan to continue this practice on future reports. Here’s how College Board explained the practice to us (this is in our words, not theirs): The User Percentile is the actual percentile of the test taker when she is compared to all other test takers who took the same test (PSAT or SAT) on the same day. However, since College Board has now shifted to system-wide testing in several states, the user percentile is no longer an accurate measure, as it does not represent the shifts in percentiles that occur when unmotivated students take the SAT in a non-standard administration at their school. The NRSP is a mathematical projection of what each test taker’s percentile would be if all students nationwide in the appropriate grade level were to have taken the test (and not merely those who actually did).

Which percentiles will colleges use? Well, frankly, we’re not sure, so you’ll note we use ACT’s most up-to-date percentiles on our concordance chart below. Those percentiles offer a comparison with all ACT test takers in the class of 2017. The key problem for counselors will be managing the expectations created by higher scores and higher percentiles. We suggest that counselors explain to students that the User Percentiles are the ones to focus on. Students could also refer to our concordance for comparable ACT percentiles.

The following is a concordance of the 2400-point, pre-2016 SAT, the same SAT on a 1600 point scale, the ACT, the Redesigned SAT, and ACT percentiles. It’s based on data tables published by College Board on April 9, 2016, the 2006 concordance studies published by College Board and ACT, and the National ACT Profile Report for the graduating class of 2017. 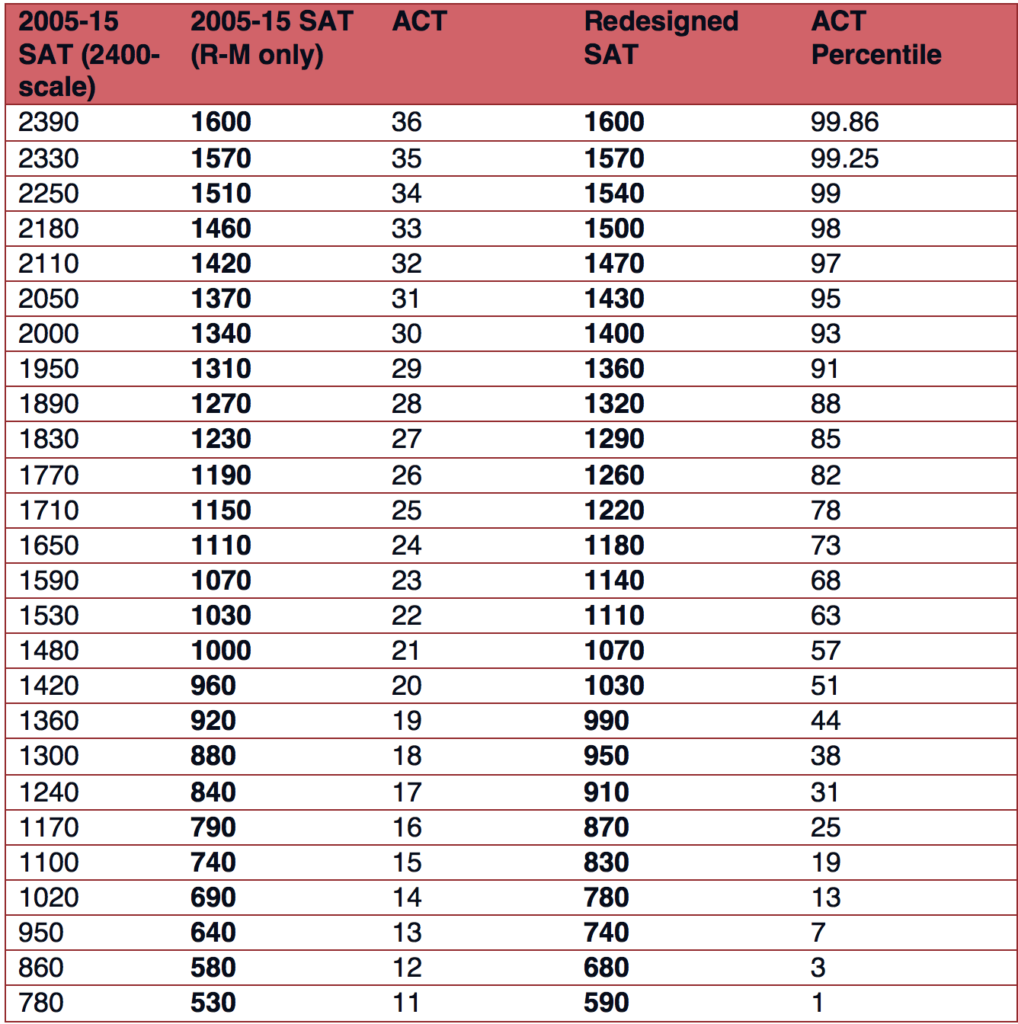 PLEASE NOTE: Counselors with further questions can reach out to us at [email protected]