Ten GMAT study tips that can help you ace the test!

The GMAT is a uniquely stressful test. For most people, taking the test follows months of preparation. I take the test every couple of years to remind myself of what my students experience on test day. Here are ten GMAT study tips compiled from my own experience and that of other Marks Education tutors to help as you prepare for the GMAT.

Plan on taking the test twice.

Kate is a sharp student whom I first saw for SAT preparation. She came back to me in college for advice on the GMAT. She had already taken a baseline test and scored a 710. Together we created a four-week study plan, and she followed it to improve to a 760 on the official practice tests (around 99th percentile on Verbal and 83rd percentile on Quantitative). When she took the actual test, however, her score did not improve from her baseline test and her Quantitative section dropped to the 64th percentile. Yet, this is not unusual. When students begin the Math section, they are often anxious and can make silly mistakes in the first five problems. Others take a little too long on a few questions, then are stuck having to guess on the last few questions. Obviously, their score suffers.

I spoke to Kate after her disappointing real test and recommended taking another test following a meditation regimen using a podcast. I also made her a maintenance study plan. After following the plan and meditating for 17 days, she improved to 770 the next time. The moral of the story? Go into the first test expecting to be somewhat nervous. Don’t put yourself in a situation where you have to be perfect the first time: Plan to take the test twice. It will help you feel less anxious and improve your overall score

It goes without saying that you should study hard and aim to cover the entire Official Guide. In addition, practice on the two free exams provided by GMAC and purchase the GMAT official Practice Exams 3 & 4 and 5& 6. GMAC questions and tests are the most valuable question sources you have. After each test, review all your errors thoroughly. On your own or with a tutor, understand why you made each mistake. There’s no point doing a second test if you haven’t learned all you can from the first one.

After you finish the six tests, do them over again! Why? Because each time you do the official tests, you will see some new questions. The GMAT is question adaptive, so as you get better, you will see harder questions which are the best practice you can get for the actual GMAT.

It takes a lot of time (and, therefore, money) and uncommon skill to craft GMAT-like questions for the Reading Comprehension and Critical Reasoning sections of the test. As a result, avoid the Verbal sections created by test prep companies and stick with the Official Guide and practice exams from GMAC to achieve your best results. And I’ll repeat point # 2: do the six official practice tests multiple times if you need more practice.

Set incremental targets and give yourself time to reach your eventual targets.

I recently worked with a student who started with a baseline score of 530 and was aiming for a score of 650 – all in one month while he worked a full-time job. We revised his targets to make them more manageable. Our first goal was a 570, then a 600, and then a 650. All through our prep, I stressed the next, most immediate target – and he ended up with a final score of 660. If you’re starting at a 580 with a 30th percentile on Quantitative, your first target should be a 40th percentile on Quantitative. Don’t worry about probability or combinatorics, from which you might see one or two hard problems. Work on number properties first, then on algebra, and then on geometry, which are the most common topics for problems on the Math section of the test. Start with easier problems and work your way towards the harder questions.

A ‘skipper’ is a problem that is too difficult for you to solve, which you will identify quickly and always skip—on the GMAT, that means guess and move on. Because of the question-adaptive nature of the test, if you get a problem correct, the next one is usually harder. At some point, you will get to a problem that you can’t solve in two minutes and therefore should skip. For most students, moving on is the hardest part of the test and their Achilles’ heel.

In order for you to identify your skippers quickly on test day, you have to practice doing so on every timed practice test. Remember, on test day you will revert to strategies you know best. If you are used to taking your time on harder questions when you do practice tests, hoping to eventually solve them, that’s what you will do on test day.

Finish all the Verbal and Quantitative questions.

On the real GMAT, make sure to finish the verbal and the quantitative sections because there is a significant penalty for not finishing either section. Answering all the questions might mean guessing on the last few questions. And since you should treat practice tests like real ones, make sure to practice finishing answers in your test preparation too.  There are only three inputs into the GMAT scoring algorithm: number of questions answered, number of questions answered correctly, and difficulty of questions answered correctly.  Below, I’ve attached a screenshot from the GMAT Official Guide Quantitative Review that speaks to the importance of finishing the verbal and quantitative sections. 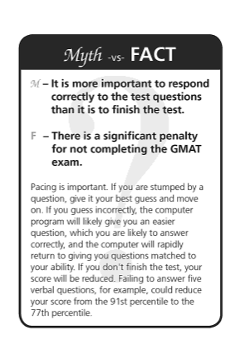 On their exam day, one of my GMAT students ate a moderate breakfast, did a yoga workout, ate a Sushi lunch, and then took the GMAT. The test started at 3 p.m. and ended at 7:30 p.m., so he was starving by the last sections and couldn’t focus. As he later realized, he would normally have had three meals by that point. Instead, on test day, he had only one and a half meals.

If you’re taking the test at 8 AM, eat a hearty breakfast and bring enough snacks for lunch. If you’re taking the test in the afternoon or evening, eat breakfast and lunch, and bring a healthy snack. Your brain runs on glucose. Feed it. Eating a high protein diet will do nothing, and just drinking coffee will do nothing. If you’re out of carbs, you can’t think. Take at least one practice test at the time you plan to take your actual GMAT, and make sure you try out your eating plan as well!

When students do worse than expected on the Math section, it’s often because they are jittery. When students have a lower than expected score on the Verbal section, it’s often the case that they were starving by the time they got to Verbal. When debriefing a test, I always ask students: “At the end of the test, did you feel cranky? Did you feel like you could eat a horse?” Their answer often tells me why the test didn’t go as well as expected.

Charles Czeisler, a professor at Harvard Medical School, is a sleep expert who advises the CIA and NASA on sleep. In a Harvard Business School article that I encourage all my students to read, Czeisler says:

“… a major factor that determines our ability to sustain attention and maintain peak cognitive performance has to do with the total amount of sleep you manage to get over several days. … if you get less than [8 hours a night] for several days, you start building a sleep deficit that makes it more difficult for the brain to function .… If [executives] average four hours of sleep a night for four or five days, they develop the same level of cognitive impairment as if they’d been awake for 24 hours—equivalent to legal drunkenness.

Lack of sleep not only severely impairs cognitive function, but it also causes students to get more anxious on test day. The best test takers sleep eight hours a night for the week before the test. Period.

10 minutes of meditation a day has been shown to alter brain chemistry and improve cognitive performance on tests such as the GMAT, as explained here, here, and here. Over half of my students meditate, and more than a dozen have written to me about how meditation helped them ace their test, prevent panic attacks, or deal with unusually stressful testing scenarios. Find a podcast or teacher that works for you, or ask one of our tutors for help.

Find out more about our experienced GMAT tutors, Nitin Sawhney and Lance McNeil.